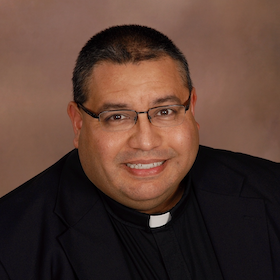 Fr. Adrian was born in El Paso, TX and moved to North Carolina in 1980 with his family. He began discerning a vocation to the priesthood during his junior and senior years of high school. The Marian Sisters of the Immaculate Conception at his home parish in Greensboro, NC helped him process this calling through spiritual direction.

He then went on to Brevard College and finished his BA in Theology from Belmont Abbey College. After entering the Marian order he remained there for six years and later decided that the Diocesan priesthood was a better fit for his gifts. He went on to get his Masters in Divinity from the Dominican House of Studies in Washington, DC.

He was ordained to the priesthood in December 2001 and has served in four different parishes. He has been at St. Barnabas since 2008, being named the Vicar Forane for the Asheville Vicariate in 2018 by Bishop Jugis.